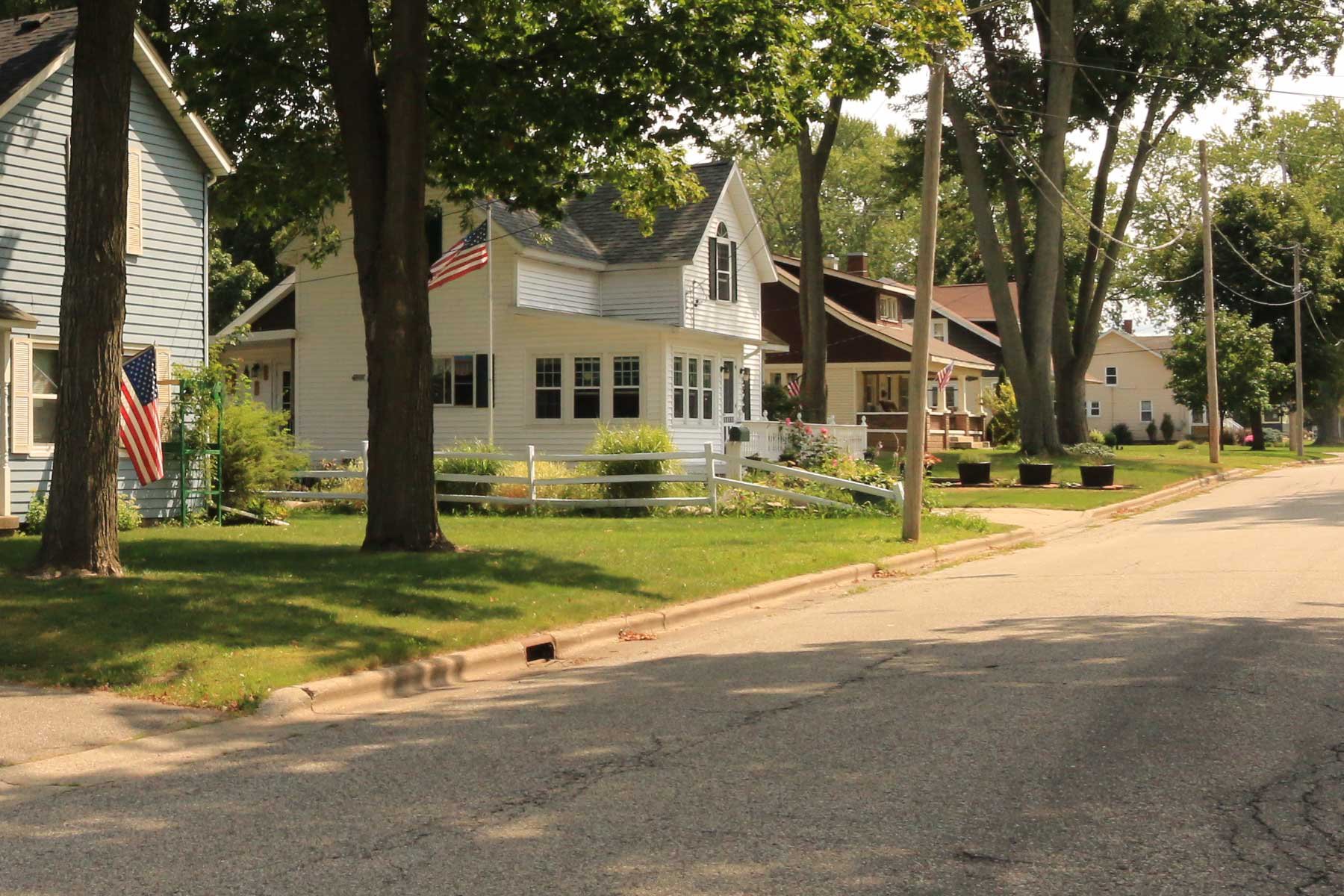 Hudsonville was named after one of the earliest settlers, Homer E, Hudson, who was born in Cleveland, but moved to this area in 1848. He bought land in Georgetown Township from the Jenison brothers, which he developed into a nursery with fruit trees. This was the beginning of the many orchards throughout the state. Other settlers joined Hudson and a small community sprang up, one of those settlers was the Hughes Family who owned the land that is now known as Hughes Park. They ran a farm and one of the many sawmills in the area. Growth of the town was steady, but never spectacular. It helped when, in 1873, Homer deeded twenty acres to the community and recorded it as the village of Hudsonville, however, swampland on three sides hampered development. Previously the settlement had been called South Georgetown. Homer was the first postmaster and distributed the mail from his own home. On February 18, 1872, this postal station was designated as Hudsonville by the federal government. In 1872 the Chicago and West Michigan Railroad came through, a factor in subsequent arrival Of Dutch immigrants. The train went from Grand Rapids to Holland and on to Chicago passing through Hudsonville. The Dutch immigrants who arrived in the 1890’s from the low wetlands of their country turned the Tamarack Swamp, surrounding Hudsonville on three sides, from wasteland into productive farms. They produced onions, celery, carrots and other truck farm crops which is why for many years Hudsonville was called the “Celery Center.”

At the close of the 19th Century Hudsonville homes were without running water, electricity and telephones, with hitching posts for the horses and buggies. The roads were dusty in dry weather and muddy in wet weather. As growth continued, churches and schools were built. The city’s first schoolhouse was built in 1892 on school Street and the oldest recorded church is The Congregational Church of Christ, organized in 1875. Soon they were joined by a hardware store, a general store, a lumber com- many, a mill, a barber and in 1910, the first high school. The first Christian grade school was built in 1917 and still remains on Oak Street. Soon, residents were buying the “horseless carriage” and getting electricity and telephones. The arrival of automobiles resulted in gasoline stations and repair garages. In 1923 a narrow two-lane road known as Pike 51 was constructed through Hudsonville. It later became M-21, which today is called Chicago Drive.

The boundaries of the village were moving to the west and in l927, the Village of Hudsonville drew up a charter and became incorporated to become a separate village on the Michigan map. However, in 1931 the first Hudsonville Community Fair, inspired by Chicago’s World Fair, was held at the high school. Products of the farm and home were exhibited: poultry, lowland crops, fruit, high- land crops, calves, hunting dogs, needles and fancywork, canned and baked goods. This fair began as a three-day event and continues to this day, spanning a week and drawing more than 80,000 through its gates. Hudsonville is the third-largest city in Ottawa County and is attractive to many people because of its well-kept homes, good streets, accessibility to churches and schools and an abundance of parks. Its businesses are known for their friendly and excellent service. Hudsonville is a great place to live, to shop and to do business.Today the population of Hudsonville is 7160 and the city’s location, just off I-196 makes it minutes away from Holland or Grand Rapids. It is also the first exit west of the new South Belt Freeway (M-6). The city is now recognized as being strategically centered in a strong economic growth area.At the same time, the downtown central business district, was revitalized with new development, improved parking and updated lighting. This area includes a grocery store, banks, shops, restaurants, city offices and a new Post Office. In 1999 the Hudsonville Area Chamber of Commerce opened their first permanent office in the downtown area.

In 1973 the population was over 3500 and Hudsonville celebrated its 100th birthday. In 1971, I-196 expressway extended through the countryside south of the city, bringing more residents to the community, now known as the “Salad Bowl City.” By 1995 a new city hall and fire station was built along with many more homes. The expressway facilitated the addition of the Buttermilk Creek Industrial Park (north of the expressway) and the Hudsonville Business Park (south of the expressway), which added light industries and fast-food restaurants to the city.In 1963 the population was now 2659 and the school district consolidated with a new high school, a separate junior high and six elementary schools (South, Park, Alward, Bauer, Jamestown and Forest Grove) with a total enrollment of 2267. Municipal water from Lake Michigan became available in 1966 and a municipal sewage system was constructed in 1971. A larger water tower was also built.In 1957, Hudsonville officially became a city and in the same year, a new post office was dedicated and two more elementary schools (Park and South) were built.Hudsonville’s growth increased after World War II and by the 1950s the population was 1101. A new four-lane double highway was constructed in 1950 called M-21. Public and private schools were continuing to grow and in 1953 a new Unity Christian High School was built on Oak Street. Hudsonville experienced Michigan’s second-deadliest tornado since 1950 on April 3, 1956. The weather was very hot and humid and the twister killed thirteen in Hudsonville and injured more than 200 throughout Ottawa County. More than one million in damage was reported.In 1910, the population was still only 800, because many who called Hudsonville home, really lived in the surrounding farm country between 1941 and 1945, many young men from the community were killed in action during World War II. They were first remembered at the Memorial Park on School Street and more recently, at the Veterans Memorial Park on Central Boulevard next to the city offices.